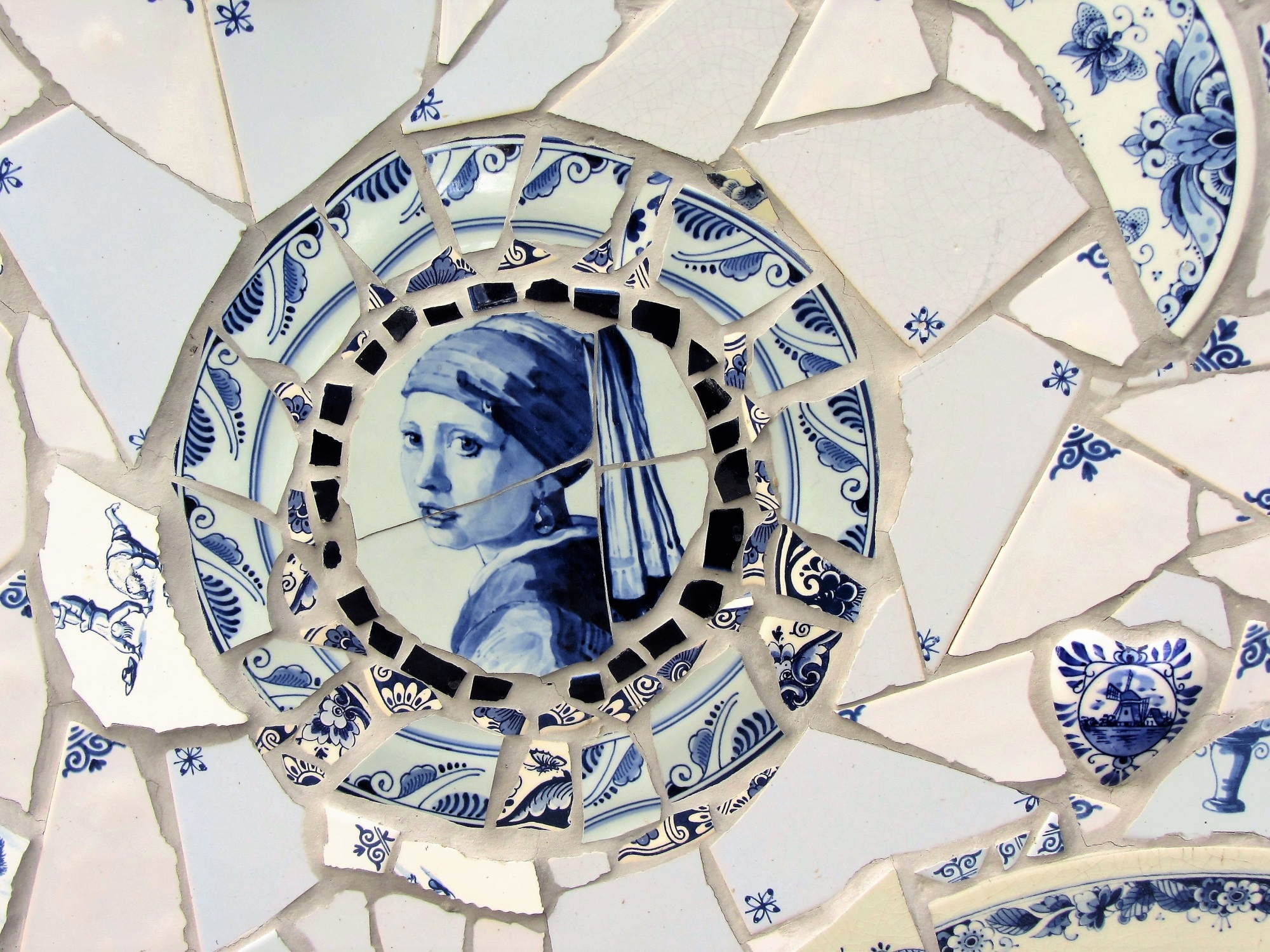 On Vermeer’s Young Woman with a Water Pitcher

The woman’s figure is halved by its actions,
The two selves of her motives weighing
In a balance of desire and domestic duty:
Her left hand on the handle of a silver pitcher
An instant before she raises it from the basin,
Her right on a window swung slightly open
As the flash of some lure draws her eyes
Away from her chore and down into the street.

Her sombre blue dress is not exactly a habit,
But the starched white linen coif and collar
Clothe her in a nun-like modesty.
You ask yourself whether she could be a virgin daughter,
Her life devoted perhaps to nursing an invalid,
An honored father or mother, difficult to please.
Or is she a reluctant wife anxious to appease a cold husband,
More likely than not, years older than herself,
Whose fastidious passion for cleanliness and order
Is stronger than his expedient affection for her?
Whichever, her head is turned away a moment
From the suffocating household demands
To breathe the light flooding through the window
Into a mind gasping for the air of freedom’s dreams.

Her trance-like gaze through the ornately mullioned glass,
Tinted violet by the sky’s reflection in it,
Teases you with the mystery of what could be
The object of such rapt fascination.
A young gentleman, of course, first comes to mind,
Whose physical charms are a piercing arrow
To the longings she would blush to name.
The sliver of a smile she allows herself
Suggests somehow a stronger pleasure warms
The shadowy depths of her being.

There is something furtive in her manner.
Shyness or shame restrains her
From showing herself in the window.
She stands back from it in the corner of the room,
Hiding herself from the eyes in the street.
The pitcher and its cleansing water may be,
As the experts say, a symbol of her purity,
But you have a notion the picture tells a plainer truth
About how fragile virtue can be.
The flesh with its nagging demands,
The heart with its insatiable appetite
For richer food than its daily fare
Chafe against the bonds of propriety
And tempt her into places within her
As strange to her familiar self
As the far-off countries
On the map behind her on the wall.

For years the antique water jug or vase, or whatever
The voluptuously shaped ceramic actually is,
Sat more or less abandoned on the floor
In the haunted dark of my bedroom closet
In the house that I grew up in, along with the sword
My grandfather brought back from the trenches of France
And the leather razor strop that hung on a hook in plain view
Like a nuclear deterrent to youthful bad behavior.
My brother and I used to fill it with spares pennies,
An open-vaulted bank we could rob to buy candy.
In time I came to see it with different eyes
And its mysteries have vexed me for decades
With as many questions as Keats’ urn posed to him,
Though mostly questions of quite another kind.

The story of the article’s origin is vague, the details sketchy.
It came out of the house of an aunt or a cousin
Of my grandmother, an O’Brien or a Sheerin,
Some shanty Irish Kate with a brogue
Who jumped up in the world by marrying a ship’s captain.
He sailed the tall-masted Clippers that plied the China trade.
Rumor is he was a slick-haired, swarthy Portuguese.
No doubt, the match raised a few clannish eyebrows.
How my grandmother came to have the thing
Is anybody’s guess; I suppose, it was her mother’s devise
And her widowed father had brought it into that house
Where, in the end, still grieving forty years on
For his Mary he’d lost in birthing their sixth child,
He shut the door and laid himself out on the bed
With his beads and his threadbare suit
And calmly died in the room that later was mine.

In my mind it is a treasure, more colorful,
More ornate than the chaste design of something Ming.
I can find nothing about the black mark on the bottom rim,
A figure like a calligraphic seven, to tell me by whom
Or where or when it might have been made.
For all I know it may be only a cheap souvenir
That the captain bought on the Shanghai docks
To please his lonely Kate pacing on the Widow’s Walk
And give her a taste of the strangeness of foreign parts.
I’d like to know what her reaction might have been
To the human figures depicted, I think, with decoupage,
In the richly textured scenes all around the bowl,
The stern-faced men with wild, bushy eyebrows
Looking out at her from the curving surface,
Their tight-lipped mouths framed by fu manchus.
Would they have struck an inexplicable fear in her,
Just as Chinese faces often sent a shiver through my mother?

My response to them is more cerebral than visceral.
The bald circle on the crown of each man’s head intrigues me
As a hint of something more than natural fact.
I suspect we are to take the figures
In brocaded robes reading from rolled out scrolls
For symbols of some Confucian virtue.
Or are they mandarins or poets or gods in the heavens?
There is something almost cherubic
About the milk-white faces of those who attend them,
But my smattering of imperial history
Leads me to believe these are probably eunuchs.

What I know for sure is this exotic objet d’arte,
Even with all its unanswered questions, is part of who I am,
An item no appraiser can set a price on
That tells the truth of its real worth.
Yet, handed down the generations to me,
A childless bachelor, its history will have no heir,
And, disowned of its lineage, it will soon fall
Forever into the silence of a mere thing.
In my sleepless nights I sometimes hear
My ancestors’ ghostly reproach for having failed
To fulfil the one certain purpose all beings are born for,
And left the family name and this heirloom an orphan.
That it will end its days in shattered shards at the dump
Is not my only fear and maybe not my worst.
I suppose one day some collector of stuff
Will bid for it at an auction or haggle for it
With a dealer or a flea market vendor
And bring it home a trophy, a conversation piece
That he can brag to his friends over cocktails
About the bargain he got it for.

I’d heard he had a house in town,
But he was not alone in his celebrity
There in that place where folks
Never tired of reciting the list
Of actors, writers, rock stars
Who escaped the whirlwind of their lives
For weekend getaways or summer holidays
Among those bucolic hills
And the postcard unreality
Of the bandstand on the village green.
It was a summer day; the screen door squeaked
As I walked into the pharmacy,
The deliberate anachronistic charm
Of its soda fountain’s chrome gleaming
In the sun that poured through the window.
There he was – sitting cross-legged on a stool,
Sipping a vanilla shake from a straw
Like some drugstore cowboy
Waiting to be discovered
In the dream world of Hollywood long ago.
The gravel-voiced, type cast tough guy
I’d seen so many times on the movie screen
Turned his head like a curious bird,
Looked me straight in the face,
And gave me a patronizing smile
That seemed to say, “Yes, I really am
Who you think I am.”
I would not let his eyes meet mine
But strode ahead stone-faced
As if I did not notice him there
Or have the slightest idea who he was.
I would not allow myself to bow down
Before such a false idol.
Something small and petty in me,
A contempt for fame, no doubt,
Conceived in envy’s womb,
Would not give him the satisfaction
Of letting on to him, despite myself
And all my radical politics,
That sideways glimpse of him
Made my day.

James Mele is a graduate of UCD and the Antioch International Writing Program. He has published poetry, fiction, and articles in numerous periodicals, most recently in Blueline, Innisfree Poetry Journal, and Connecticut River Review. His first full-length poetry collection, Dancing in Eurynome’s Shoes, was published by Antrim House Books in 2017.